In functional programming we are often concerned with mathematical or pure functions - functions that do not perform side effects. Side effects are modifications of state outside of the local environment. Examples of this can be to store values in the database, fetch data from another server or alter a variable outside your functions local scope. In other words it is the very concept of things actually happening. 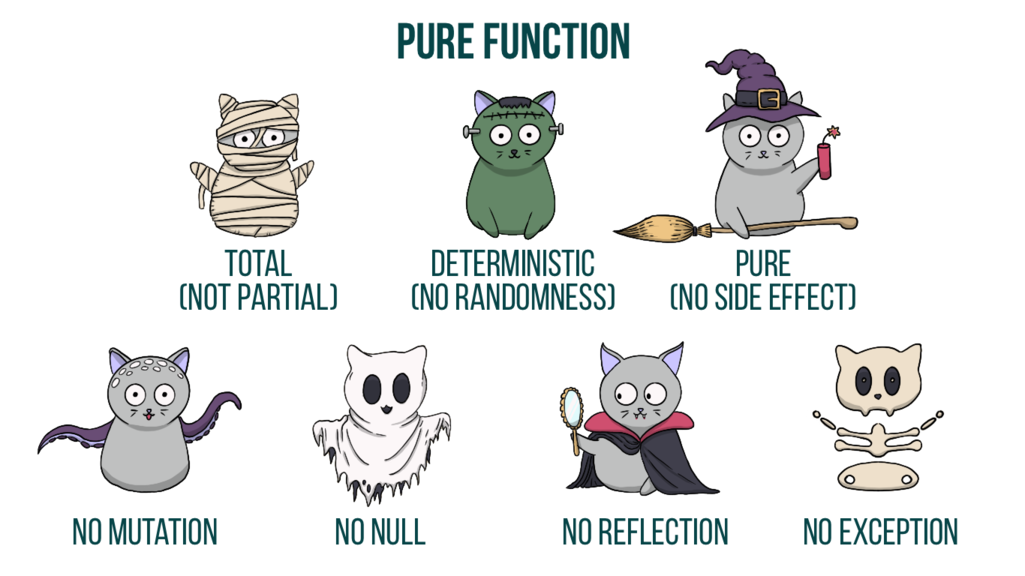 When writing software in the functional paradigm are we then simply not interested in making software that solves things? Well, of course we are, but we like to know where we are impure! And we are still stuck with the broad definition of what a side effect actually is. Given advanced enough spy technology hackers can figure out your encryption keys based on the mere sound of the CPU 😱 Is then each and every CPU cycle an observable side effect we should have control over?

What a rabbit hole we got into. You probably agree that the line must be drawn somewhere. If we take a few steps back to the pure functions, then what are the properties that they have and we as programmers want?

Let us talk about the function f which takes a number x and add a two in a pseudo programming language.

We can use this function to define the following expressions:

The value of B will become 8. Do we even need the temporary expression with the value of 4? No, we can refactor it into:

This computation will have the property that B1 is equal to 8. We could substitute each usage of A with the computation that defined it. Having this property is what we call referential transparency.

Here is the same example given in the programming language Scala:

The same properties hold for this code and we can yet again substitute the usage of a with f(2) without being afraid that anything else will change. Now, what happens if our business requirements change? We need to tell our users what values get in:

Running the same statements again with the new function f1:

Between the two statements we have out commented code that shows the console output if we had run the program in a terminal. What happens if we perform the same refactoring as in the pseudo programming language?

Did you see what just happened? The computational result in b is still the same but we printed out the input to the console twice! This tells us that the println function broke the referential transparency property of our f1 function. Now we also know that println performs side effects in a way that alters how we can reason about other functions that use it.

Now we have seen the kind of side effects that we should care about. They alter the meaning of what our software does based on how they are used. Refactoring code where we have this property is simple because we can use local reasoning to know what changes that are safe to perform.

If you are unsure if a particular side effect is something that you should care about then do the simple exercise of substituting it in a way similar to what we just did above.

In this simple example this is no problem. What if this was a destructive action against the database or an expensive call to another system? It's an easy mistake to do. One effective tip is to use this tool to separate the pure business domain of our code against the parts that actually does something. Or if you have to do mutations then hide it in a function so that the users cannot observe the side effects.

But can we permanently defend ourselves against such issues? Ensure that all code is referentially transparent and perform side effects in a controlled way? Yes we can! But that's a treat for another day. Happy holidays!