Using the Try Monad for exception handling in GraphQL-java

In this blog post I will go through some practical examples of using the Try monad for exception handling in Java. The purpose is to see how we can write more functional code in a non-functional but widely adopted language such as Java.

What is a Try anyway?

The Try data structure is a special case of the Either data structure, where one side is always an Error or an Exception. The point of using a Try instead of an Either is that it becomes very clear that it contains an Error, and may contain methods such as mapFailure and mapResult.

A function which throws an exception would look like this.

Now, they might not look that much different. With Try, you have to treat the data structure returned with a result containing the Exception. In the other, since IOException is checked exception, you must also handle the IOException as a caller. We will see later that there are other advantages to using a Try instead of an Exception.

One problem with this approach is that we can no longer know if this method throws an exception or not by looking at the signature. We can jokingly say that our method signature is lying to us.

Program flow with and without Try

To help understand the differences between using Try or normal exceptions, let's see an example. In this example we have an API-controller which receives an HTTP-request, and parses it. It then sends the parsed request down to a validator component which validates the request. The request is then handled to a service layer which in turn uses a repository. The repository can for example be an external service or a database. The response from the repository is then returned up the layers and finally to the API-controller. This path is shown in the figure below

Now lets consider the error case where the repository code encounters an error and throws an Exception. The code flow would then look like this. 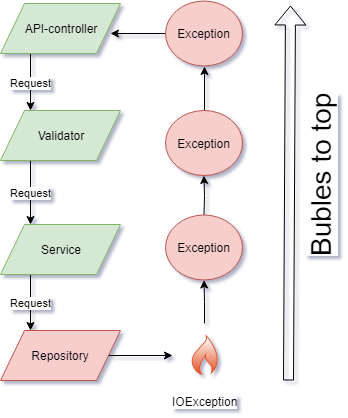 In this case which can be quite common in Java we throw an Exception and it will bubble all the way up and be handled by our global exception handler which will log the error for debugging, and return a nice response to the user.

There is no native Try in java, so we have to get an implementation from a library or write one ourselves. It can be a fun exercise to write our own Try-monad, but for now I will only reference some other popular libraries. Vavr contains a Try monadic container and many other functional data structures and utilities. It is quite popular and widely used. Another great, but in my experience not so widely adopted library is cyclops. Their documentation is still a bit lacking, but they do provide an excellent blog post series which goes into great depths on how to handle exceptions dysfunctional programming in java: No Exceptions.

In the examples in this post I will use cyclops Try data structure, but is can easily be replaced by others.

GraphQL is a new way of building APIs that is quite different from traditional REST. This blog post will not go into depths about GraphQL, for that see the link mentioned above. Since GraphQL is transport agnostic, it does not use HTTP error codes to represent errors. Errors are a part of the response and not something special that is handled in some other way. This blog post won't explain the details of GraphQL, but here is how the responses from a GraphQL API looks like. It is just JSON but following a specification.

In this response both data and errors are returned in the same response. This does look a lot like our Try data structure and this is one of the places where this data structure might be beneficial.

GraphQL is also often used to fetch data from many different sources. These sources can be different databases, search engines or other APIs. If one of these sources is down we can still return a partial response with the data instead of failing the whole request.

GraphQL-java is a Java implementation of GraphQL. It implements the GraphQL specification in Java. It is typical to expose a GraphQL API over HTTP and there are many project which connects GraphQL-java to a servlet. The example code provided here will use the graphql-spring-boot package and graphql-java-tools to make it easy to expose a GraphQL-API over HTTP, provide an interactive GraphiQL-client and use the schema first approach from graphql-java-tools.

GraphQL APIs are naturally a Graph and they can be written in their own graphql schema language. A schema consists of types and their relationships with each other. A simple example of a schema with a Person type can be this.

Here we have a person type which has an id, a name and a list of programming languages. The ProgrammingLanguage type has a name and a boolean, representing if it is a functional language or not. The exclamation mark means the fields are non-nullable i.e cannot be null.

When using graphql-java-tools we write resolvers for our fields in the graphQL-schema. These resolvers are automatically called by graphql-java-tools when graphql should fetch data for a field. This avoids much boiler plate code with plain graphql-java. A resolver can return a pojo containing the fields we should resolve and may also contain other fields which will be ignored. It can also return a wrapped pojo in either Future or CompleteableFuture. The latter one can be used with BatchLoaders which can batch together many fields from different places in the Graphql query and does a batch fetching for those fields.

An example of a GraphQL resolver for the Person field.

Now, how do we use a Try data structure with GraphQL-java and Resolvers? The trick is that a resolver implementation can in addition to returning pojos representing the data, also return a DataFetcherResult<T> containing the datatype or errors for the field. If we already have returned a Try<T, IOException> from our repository we only need to make a generic method to fold the try from a Try<T, IOException> to the DataFetcherResult<T>.

By doing this we can easily wrap all of our exceptions all the way from the repository and up to the GraphQL-layer in our application. This allows us to write code that does not throw exceptions but instead wraps them in Try data structures and later in DataFetcherResult before returning them in the GraphQL-api.

What advantages are there to using Try instead of exceptions?

We are forced by the compiler to handle the exceptions early and cannot write code that just ignores the possibility that there might be thrown exceptions. The control flow of the application is the same and since a GraphQL response might contain both data and errors, we can anticipate what the final response will be when errors are thrown. If we instead used Exceptions it can be hard to reason about how the final GraphQL response to the user will look like.

Writing code that does not throw exceptions might be a goal in itself. It makes the signatures of our methods honest. They no longer throw RuntimeExceptions you might not notice. On the flip side the code is now filled with Try everywhere, which might be problematic since it is often easier to just throw a RuntimeException and have it handled automatically by some root exception handler rendering an error in the GraphQL-field, after stripping away stack traces of course. I think these two styles boils down to personal preferences – the end result in the API might be the same.

But java can still throw errors

Yes, the JVM can still produce OutOfMemoryExceptions and the like. There might be hidden RuntimeExceptions from external libraries being thrown which we do not know where to catch in our code.I would argue that these exceptions are fine, since when they are severe enough. Like an OutOfMemoryException there is not much we can do in code other than to crash. If you have external dependencies which throws RunTimeExceptions you can either use the Try-monad as best you can and encapsulate them or just let them bubble to the top and be handled by your global exception handler. Since this is Java you should probably have a global exception handler anyway.

In the end the answer is it depends

Should you embrace writing functional code in a non-functional language like java? Are the functional paradigm really that much better than traditional object oriented code? The answer is off course it depends. How familiar you are with functional languages and concepts? How is the rest of the code base structured? Are you starting a new project, or is this a huge existing code base which has sophisticated error handling in place already? Introducing something completely different can make the code base as a whole harder to read since it now has two different ways of dealing with exceptions. For me personally writing more functional java code has been quite fun and a big learning experience. For our GraphQL-API using the Try-monad for exception handling, it has been much easier for us to have control over the response returned to the user and the tests are easier to write since an exception is just like a normal response.